Gebhardt & Kiefer Celebrates 130th Anniversary
with Series of Charitable Donations
Clinton Twp., NJ, April 10, 2014 -- Gebhardt & Kiefer, P.C., one of Hunterdon County's oldest and largest law firms, is celebrating its 130th anniversary in 2014.  The firm will commemorate the occasion, while also honoring the County’s 300th anniversary, with a “130/300” charitable donation program. The firm will donate 130 items to each of various charities over a span of 300 days.
“Our firm has been part of Hunterdon County since our founding in 1884,” says senior partner Richard Cushing. “We want to give back to a community that has enabled us to sustain and grow our business for 130 years.”
The firm’s first act of charity is a donation of 130 toys and games to Safe Harbor Child Access Center in Flemington.  Gebhardt & Kiefer family law attorneys William Goodwin, William Rudnik, and Diana Fredericks recently presented the items, along with a storage chest, to Safe Harbor site director Carol Dvoor.    According to Fredericks, “Carol told us that the children were in need of activities, games and toys to use during their visitation time with family members at Safe Harbor. Gebhardt & Kiefer is thrilled to be able to assist Safe Harbor in meeting this need.”  The family visitations are part of Safe Harbor’s mission to provide services to separating, divorcing, and divorced families to assure that children have continuing contact with both parents and other family members.  The center allows for parenting time/visitation in potentially high-risk situations, and allows for reintroduction of a parent or other family member.  Safe Harbor aims to provide these services in a safe, courteous and child-friendly environment.
Gebhardt & Kiefer was founded in 1884 by William C. Gebhardt, an acclaimed attorney who also served as a three-term State Senator and was appointed clerk of the Supreme Court by Governor Woodrow Wilson.  Among his many contributions to the community, Senator Gebhardt endowed Gebhardt Field, a baseball venue in Clinton that still bears his family name.  His children, Phillip, Reading and Elinor, all became lawyers who joined the firm.  Elinor was one of the first female lawyers in NJ.  Phillip was president of the State Bar Association and a local judge.  Reading helped to found the Hunterdon County YMCA and served as chairman of its Administration Committee.  The Gebhardts were joined in their practice by Bud Kiefer, a prominent estate and trust attorney.
In its history spanning three different centuries, Gebhardt & Kiefer has had its offices at four different locations in Hunterdon County. It is thought that William Gebhardt's original office was in the upstairs of the small frame building that still exists at the southwest corner of Leigh and Main Streets in Clinton. He later moved to the upstairs of the building, which is on the northwest corner of Leigh and Main Streets (then known as the Clinton National Bank). In 1954, the firm moved to 19-21 Main Street in Clinton. In 1988, the firm relocated to its present facility at 1318 Route 31 in Clinton Township. 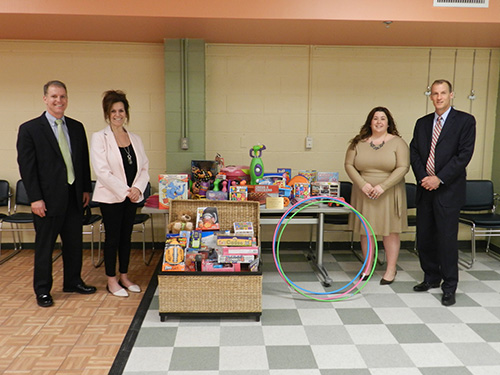